Installing An Above Ground Pool Deck Step By Step Deck Building Made Easy. 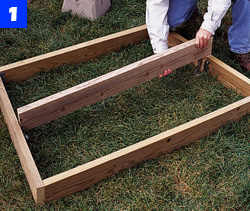 The floor framing around the pool consists of 18 trapezoidal floor-joist frames–4-sided frames with two parallel sides and two sides that angle toward each other. The dimensions for building the frames are contained in the plans. Begin by using 2 x 6s to build 17 identical frames. The 18th frame will be built to fit after the other frames are assembled around the pool.

To speed up the job of building the individual frames, use galvanized-metal corner brackets to attach the four perimeter boards. Then, use joist hangers to install the center support joist.The floor-joist frames are supported by a series of 4 x 4 posts set in the concrete pier blocks. Begin by setting the first pair of blocks directly onto the ground beside the pool. You don’t have to remove the grass, but if the ground is uneven, use a shovel to level it out. Position the first pier block so its center is 12 in. from the pool wall. Place the second pier farther away from the pool, with its center 18 in. from the center of the first. 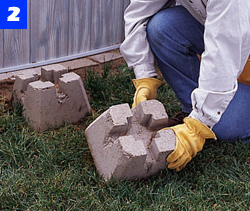 Next, stand two 4 x 4 posts in the square sockets molded into the piers. Lay a 4-ft. level across the top cap of the pool–the coping–and mark a level line across the 4 x 4s. Next, remove the posts and measure down from each line a distance equal to the thickness of the pool coping, plus 1-1/2 in. for the 2 x 6 decking, 5-1/2 in. for the 2 x 6 floor frame and 1/2 in. for expansion. Make a mark at this position on each post, and cut them to length.

Now you can put the posts back onto the piers, but make sure they’re in their original positions.Repeat this procedure for the next pair of piers and posts. Refer to the plan or use one of the assembled floor-joist frames to position the pier blocks. Once the second pair of posts is cut to size, set them into the piers and place a floor-joist frame on top. Drive 2-1/2-in. deck screws down at an angle through the frame and into the tops of the posts. Continue to work your way around the pool, setting pier blocks, posts and frames. After installing the 17 assembled frames, measure and cut the last one to fit the remaining space. 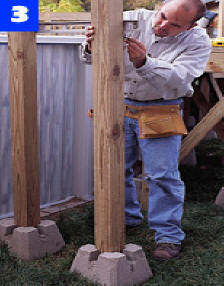 Now set the pier blocks and posts for the 10 x 18-ft. sun deck. Again, refer to the plans for the exact positioning. The 42 piers are arranged in 11 rows spaced 24 in. on center. Once the posts are cut to size and set in the piers, install the 2 x 6 floor joists. Fasten the joists by screwing down at an angle into the tops of the posts with 2-1/2-in. deck screws. 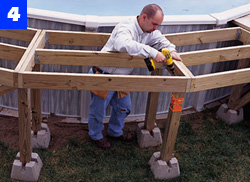 One common technique used for decking around a circular pool requires each board to be tapered so they all radiate from the center of the pool. The method we used is a lot easier. Cut several 2 x 6s into 4-ft. lengths with one end of each cut at 80° instead of square. 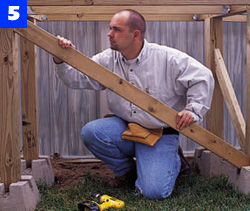 Complete the pool-deck frame by screwing 2 x 4 diagonal braces to the 4 x 4 posts. The bracing isn’t required if the deck is less than 30 in. high. 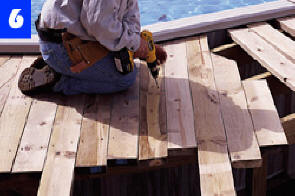 Slip the angled end of the first decking board under the pool’s coping, keeping it at least 1/2 in. away from the pool wall. Set the long edge of the deck board directly on the joint running between two adjoining floor-joist frames. Fasten the board to the joists with 2-1/2-in. deck screws.

Lay the next board tight against the first one and screw it in place. (When the boards shrink, a 1/4-in. gap will appear between them.) Continue installing deck boards in this manner, with the angled end slipped under the coping, until you come to the next floor-joist frame. 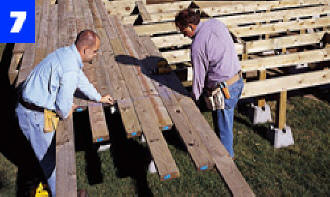 Lay a deck board in place and mark where it overlaps the joint between the two frames. Cut the board along the line and screw it in place. Trim the next two boards in the same manner, then go back to installing full-length boards again. Once all the deck boards are fastened down, use a circular saw to trim off their overhanging ends so they’re flush with the perimeter joists.

Now move over to the sun deck and start fastening down the 2 x 6 deck boards. Again, butt the boards tightly together and let them run long. Then, snap a chalkline and trim the boards flush with the joistsNext, enclose the open space under the railing with 2 x 2 precut balusters (75 cents each)–these have one end beveled to 45°. Hold each baluster perfectly plumb, then screw it to the 2 x 6 railing and to the floor joist. Set the balusters 4 in. on center, with the beveled ends facing down

Steps 9 and 10 Installing An Above Ground Pool Deck 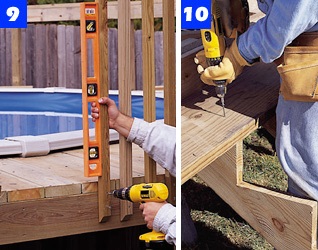 The final construction step is to build the stairs that lead from the sun deck down to the ground. To simplify this chore, we used five precut stair stringers ($7 each). Set the bottom ends of the stringers on concrete patio blocks. This will prevent them from sinking into the dirt and wicking up moisture. Screw the upper ends of the stringers to the floor joist. Create the stair treads by screwing 2 x 12s to the stringers.

In backyards all across America, the summer landscape is once again blooming with above-ground swimming pools. According to the National Spa and Pool Institute, there are about 3.5 million of these opaline oases scattered from coast to coast, and 190,000 new ones are sold annually.

It’s easy to see why above-ground pools are so popular: They’re affordable, quick and easy to install and require minimal maintenance. However, to get the most enjoyment out of your above-ground pool you need a wood deck that surrounds it. Not only will you never again have to climb a pool ladder, but a deck will also create a fun-in-the-sun gathering place for family and friends. It gives you a place to swim, sunbathe, dine at poolside or just visit.

The trouble is that most pool decks are too difficult or complicated for the weekend carpenter to build. Plus, there are very few attractive pool-deck plans available, and most of those require you to dig and pour dozens of concrete footings.

Fortunately, we discovered a better, simpler approach for building a handsome pool deck. Ours, shown here, may look complicated, but we employed a few timesaving techniques that greatly simplified the construction process and, in turn, dramatically reduced the amount of work required to complete this project. And best of all, we didn’t have to dig a single hole. 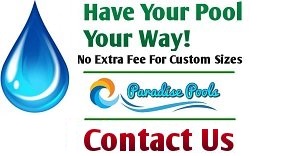 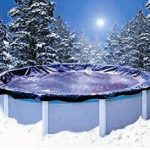 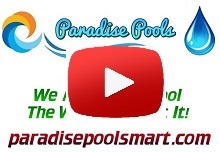